Your browser is unsupported and may have security vulnerabilities! Upgrade to a newer browser to experience this site in all it's glory.
Skip to main content 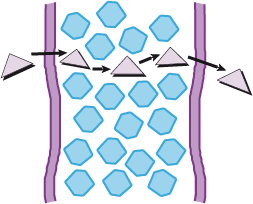 Permeation is the process by which a hazardous liquid chemical moves through a protective clothing fabric, at a molecular level. Permeation can be represented by the following simplified diagram.

The barrier properties of a protective fabric or protective seam to permeation by a potentially hazardous chemical, is determined by measuring the breakthrough time and the permeation rate of the chemical through the test material. Permeation tests are conducted following the ASTM F739, EN 369 or EN 374-3 test methods depending on the country of use and their local regulations and the physical state of the hazardous material.

The outside surface of a test fabric is exposed to a liquid chemical or gas using a permeation test cell. Breakthrough of the chemical to the inside fabric surface is monitored by sampling the collection side of the cell and analytically determining when the chemical has permeated across the fabric by use Mass Spectrometer techniques.

The rate at which the hazardous chemical permeates through the test fabric. Permeation rate is expressed as a mass of hazardous chemical flowing through a fabric area per unit of time e.g 2.0 µg/cm2 / min. or 2 millionths of a g per square centimetre per minute

The minimum permeation rate that can be detected during a permeation test .MDPR is a function of the sensitivity of the analytical measurement technique, the volume into which the permeated chemical is collected and the sampling time. Minimum detectable permeation rates can be as low as 0.001 μg/cm2  per minute in certain cases.

When selecting a chemical barrier fabric, the MDPR and expected exposure times are used to determine if the level of protection is sufficient taking into account the toxicity of the chemical used.

NORMALIZED BREAKTHROUGH TIME – ACCORDING TO EN 374-3

The average elapsed time between initial contact of the chemical with the outside surface of the fabric and the time at which the chemical is detected at the inside surface of the fabric at a permeation rate of 1.0 μg/cm2 / min. Thus the breakthrough time is ‘normalized’ as it is independent of the analyser sensitivity. Here the lowest BT is recorded.

A normalized breakthrough time of >480 minutes means that the average permeation rate never reached the defined rate of 1.0 μg/cm2 /min. However the chemical may have actually broken through but at a lower rate. 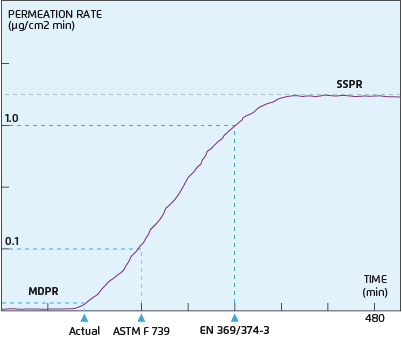 According to the European standards for Chemical Protective Clothing, the resistance of clothing materials to permeation by chemicals must be measured according to EN 369 or EN 374-3. The normalized breakthrough times are classified into six performance classes. For the European standard, the correlation table between the normalized breakthrough time in minutes and the performance class is shown in the followingtable